Following the recognition agreement signed by the PDA Union and Boots, the Pharmacist Defence Association Union (PDAU) has now established a network of PDAU representatives to represent the circa 7,000 pharmacists and pre-registration trainees employed at the company.  The PDAU Boots network consists of one PDAU representative for each of the company regions making a total team of 17 pharmacists who will now spend part of their time as trade union officials.

The members of the network will be taking on their roles once the initial union training has been completed in September when their contact details will then be made available. In the meantime, PDAU members at Boots should continue to contact the PDAU office with any concerns, comments or request for support.

The Divisional representatives, alongside members of the central PDAU team, have already attended the first pay bargaining meeting with management at which the PDAU’s Pay claim for 2019 was discussed.

The members of the PDAU network at Boots are: 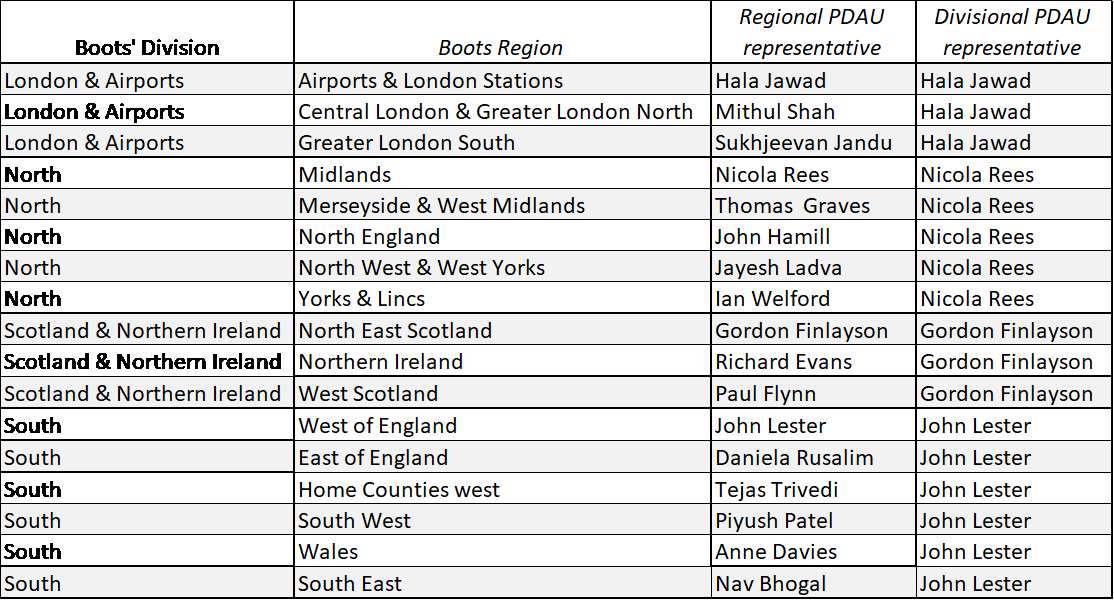 Mark Pitt, Assistant General Secretary of PDAU said: “We were delighted with the enthusiasm shown for these important roles and, as well as congratulating our new team, I’d also like to thank again those who applied but did not become part of the network on this occasion.

“We believe the Regional network is truly representative of the colleagues they will be supporting, and I know each of them is determined to do all they can to help improve the working lives of the 7,000 pharmacists and pre-registration trainees in the bargaining unit.”

The agreement at Boots means that the PDAU is now recognised to collectively bargain over pay and other working conditions, be consulted on significant issues and reach agreements with the company on behalf of all store and relief pharmacists and pre-registration pharmacists.  Trade union representation for disciplinary and grievance meetings and other PDAU benefits are only available to union members.

Mr Pitt concluded: “The current experience of our representatives working at Boots combined with the resources, expertise and connections of the PDAU means we can do an even better job for our Boots members. We want to see issues being resolved as early, as locally and with the least disruption, so that pharmacists can get on with being the healthcare professionals they are employed to be, patients can receive the care they need, and the company can prosper.”

Don’t miss a thing. Sign up to the Pharmacy in Practice newsletters.

Pharmacy in Practice is a UK pharmacy publication with its roots in Scotland.

Letters to the editor

Pharmacy In Practice uses cookies, by continuing to use this site we will assume you are ok with that Find out more.